You are here: Home / Who We Are / Suffrage100MA History 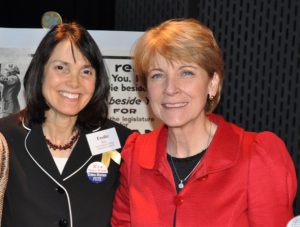 Suffrage100MA began in 2010, when then-Attorney General Martha Coakley wanted to commemorate the 90th Anniversary of the adoption of the 19th Amendment to the U.S. Constitution. Aware of attorney Fredie Kay’s strong interest in women’s issues, the Attorney General asked Fredie if she was interested in creating a commemoration. Not only was she interested, but Fredie also had a long-standing passion for the value of sharing the largely unknown history of the women’s suffrage movement. She believed that if more people understood the obstacles faced, the sacrifices made, and the physical mistreatment many women suffered in jail to achieve suffrage, the more they would appreciate and exercise their right to vote.

Fredie began the effort to commemorate the 90th Anniversary with the Attorney General’s Office by identifying and contacting a range of Massachusetts organizations that might be interested in participating. The response was terrific.

In 2010, eighteen organizations became participants in Suffrage100MA – with nearly 300 people attending the screening of the movie Iron Jawed Angels at the Barbara Lee Family Foundation Theater in the Institute for Contemporary Art. The movie stars Hillary Swank and Angelica Houston and tells the unforgettable, true story of women risking their lives to achieve the vote. Suffrage100MA continued with yearly Anniversary commemorations, at the Swan Boats on Women’s Equality Day (August 26) and with a full house at the screening of the movie Suffragette in October 2015.