You are here: Home / Resources / Did You Know? / Suffragists or Suffragettes? 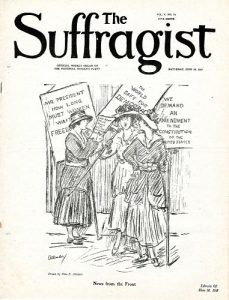 Not long ago, Meryl Streep played Emmeline Pankhurst in a British historical film about women’s suffrage entitled Suffragette, directed by Sarah Gavron. While the 2015 film has wonderfully introduced women and men to the women’s suffrage movement, many still don’t realize that American women fighting for the vote, like Elizabeth Cady Stanton and Susan B. Anthony, called themselves suffragists rather than suffragettes, a term widely used in Britain.

So, what exactly distinguishes these terms? What is the difference between a suffragist and a suffragette?

A suffragist, by definition, is anyone who advocates for enfranchisement, or the right to vote. It wasn’t until after African American men were enfranchised in 1870 that the term referred to women’s suffrage advocates, which it most commonly refers to today. 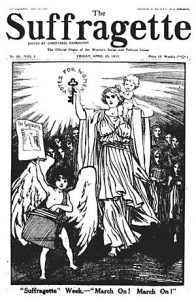 nalist Charles E. Hands coined the label “suffragette” to mock and diminish suffragists of the Women’s Social and Political Union (WSPU). Founded by Emmeline Pankhurst, the WSPU used “militant” efforts to fight for suffrage including arson, hunger strikes, destruction of public property and even bombing, thus gaining them the new title. Adding the diminutive suffix, “-ette,” was meant to minimize these women and distinguish them from “constitutional” suffrage advocates, namely Millicent Fawcett, who relied on “non-militant” efforts including petitioning, lobbying and marches.

Members of the WSPU embraced Hands’s intended insult and called themselves “suffra-GET-tes,” with a hard “g,” to signify that they were going to “get” the right to vote. “Suffragette” was first used to distinguish advocates only in the United Kingdom. Later, some U.S. publications also used the term in reference to American campaigners for votes for women. But historically, “suffragette” was considered an offensive term in the United States, and, unlike their British counterparts, not embraced by the women’s suffrage leaders of the US. Instead, our leaders called themselves suffragists, which is the term we continue to use today to refer to those in the U.S. who fought for the vote for women. Whether it was the suffragettes of Britain or the suffragists of the U.S., the path for women to achieve the vote was long and hard on both sides of the Atlantic. 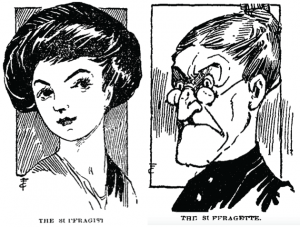 In the early 1900s, American and British publications, including The New York Times and Daily Mail, depicted “suffragettes” as unladylike and reckless. At the same time, they described “suffragists” as gentle and innocent, but vulnerable to joining their counterparts. A 1912 issue of The Boston Daily Globe depicted the two (right).

These unfortunate caricatures appeared to pit one group of women against another, even while their aims remained closely aligned.

Interesting articles from 1900s newspapers and other references: