You are here: Home / Resources / Did You Know? / Featured Suffragists / Sojourner Truth

Sojourner Truth (born Isabella Baumfree) was both an abolitionist and a 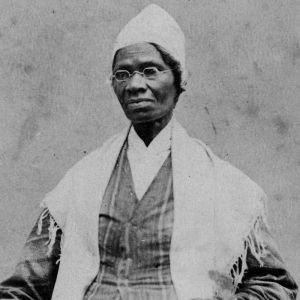 champion of the women’s rights movement, exposing the important intersection of gender and race.

As one of the only black women of the time who spoke for women’s rights, she is most well known for her “Ain’t I a Woman” speech at the 1851 Women’s Rights Convention in Akron, Ohio: “That man over there says that women need to be helped into carriages, and lifted over ditches, and to have the best place everywhere. Nobody ever helps me into carriages, or over mud-puddles, or gives me any best place! And ain’t I a woman? Look at me! Look at my arm! I have ploughed and planted, and gathered into barns, and no man could head me! And ain’t I a woman? I could work as much and eat as much as a man – when I could get it – and bear the lash as well! And ain’t I a woman? I have borne thirteen children, and seen most all sold off to slavery, and when I cried out with my mother’s grief, none but Jesus heard me! And ain’t I a woman?”

By showing her own strength, Truth embodied her feminist message and gained important publicity for the suffrage and abolition movements. Truth used her spiritually influenced oratory skills to give speeches promoting the equality of women as well as the equality of African-Americans, and the issues of temperance, abolition and supporting African-Americans fighting in the Civil War.

From 1843 to 1857, Truth lived in Florence, Massachusetts where the Sojourner Truth Memorial now stands (photo, right), honoring her work as a woman activist and abolitionist. Upon first arriving in Massachusetts, Truth joined the Northampton Association for Education and Industry, an egalitarian commune designed to help reconcile class conflicts and a place Truth described as being of “liberty of thought and speech.” During her time in Northampton, Truth met reformers, including Frederick Douglass, William Lloyd Garrison, and James Boyle, who shared her antislavery feminist ideology. After the Northampton Association dissolved, Truth bought a home in Florence and continued working as a public speaker who challenged and inspired abolitionists and feminists alike.

Truth’s work in fighting for human rights has earned her two recent recognitions. In April of 2016, Treasury Secretary Jack Lew announced that Truth, alongside Susan B. Anthony, Lucretia Mott, Alice Paul, and Elizabeth Cady Stanton, will be featured on the back of the new ten-dollar bill design to honor her work for the suffragist movement. On September 19, 2016, during a ceremony at the Boston Public Library (photo, left), Navy Secretary Ray Mabus announced that two US Navy ships are being replenished and named after Suffragists Sojourner Truth and Lucy Stone.