You are here: Home / Resources / Did You Know? / Featured Suffragists / Ida B. Wells 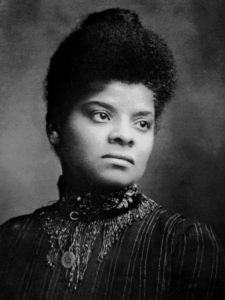 “I think Ida B. Wells should be remembered as an African-American woman who battled both racism and sexism at a time when it was extremely dangerous to speak out… She used her gift of writing, speaking and organizing to help shed light on injustice.  She was extremely brave and held steadfast to her convictions despite being criticized, ostracized and marginalized by her contemporaries.”

Born in Holly Springs, Mississippi on July 16, 1862, Ida B. Wells-Barnett became an activist and suffragist honored for her pride in being an African-American woman. Her father was a political and community leader, despite the dangerous implications of being socially active as a newly freed slave. After losing her parents and infant brother during the yellow fever epidemic of 1878, Wells carried on the family legacy of courage and activism while caring for her remaining siblings. Despite doing so, she managed to secure a well-paying job as a teacher while taking classes at Fisk University in the summer.

In 1884, after living in Memphis, Tennessee for two years, Wells demonstrated her determination for racial justice in an incident that would launch her journalism career. On May 4, Wells took her seat in the “ladies” coach section of a train to Nashville. When the conductor ordered that she move to the African-American section, Wells refused, putting up a fight, even biting the director’s hand and being ejected from the train. Though she initially won court cases against the train company for its unjust treatment, the decisions were later reversed. Frustrated with the ineffectiveness of the courts as a platform for activism, Wells turned to journalism in order to fight racial and gender injustice. After already having numerous articles published in local and national periodicals, Wells became an owner of Memphis Free Speech and Headlight in 1892.

Wells is widely known for her relentless work on behalf of the anti-lynching movement. Her efforts began in 1892 after three African-American men, having recently opened a grocery store in competition with the other white-owned store, were lynched by a white mob. Motivated by this event, Wells began investigating the practice and shared her controversial findings in the Memphis Free Speech and Headlight. Her editorials caused such outrage among the white community that her life became in jeopardy, and she was forced to flee to Chicago.

In Chicago, Wells shifted her focus to the women’s suffrage movement, continuing her devotion to justice and democracy. In 1895, she married attorney Ferdinand Barnett, added Barnett to her name and became a part owner of her new husband’s newspaper, the Conservator. Around her new home in the Second Ward, Wells-Barnett embraced the widely expressed interest in politics among women by establishing the Alpha Suffrage Club in January 1913. Through her work with the Alpha Club she realized that African-American women did not necessarily have the education to participate in politics and the electoral process. Inspired by this fact, she reached out to other clubs for black women at the local, state, and national level in order to encourage more women of color to become involved in politics.

In March 1913, Wells-Barnett traveled to the first suffrage parade in Washington D.C., an event organized by the National American Woman Suffrage Association. On the day of the parade, Wells-Barnett and sixty other black women arrived to march with the Illinois delegation, but were immediately advised, as women of color, to march in the back, so as to not upset the Southern delegates. Wells-Barnett refused, arguing: “Either I go with you or not at all. I am not taking this stand because I personally wish for recognition. I am doing it for the future benefit of my whole race.” She initially left the scene, therefore convincing the crowd that she was complying with the request. However, she quickly returned and marched alongside her own Illinois delegation, supported by her white co-suffragists Belle Squires and Virginia Brooks. This event received massive newspaper coverage and shed light on the reality for African-American participation in politics.

Wells-Barnett’s largely community-based efforts, especially with the Alpha Suffrage Club, helped the women’s suffrage movement reach its success. Her work helped pass the Presidential and Municipal Bill in Illinois in June 1913, giving women over age 21 partial suffrage (the right to vote in presidential and municipal, but not state, elections). She helped register women voters and constantly encouraged women who remained doubtful of their place in the electoral process. Even after the Nineteenth Amendment was adopted in 1920, Wells-Barnett traveled throughout Chicago and Illinois emboldening African-American women to vote and participate in politics.

Today, Ida B. Wells-Barnett is recognized for her outstanding courage in expanding opportunities for women of color in the suffrage movement, for her journalistic talent, and for efforts to raise awareness of the horrors of lynching. The National Association of Black Journalists offers the Ida B. Wells Award yearly in remembrance of her leadership, while the city of Chicago has plans to build a statue in her honor. In 1990, Wells was also honored as a human rights activist on a postage stamp. Along with these acknowledgements, the Ida B. Wells Museum is located in her hometown of Holly Springs, Mississippi to celebrate and remember her life’s work for African-Americans and women.