You are here: Home / Resources / Did You Know? / Featured Suffragists / Elizabeth Cady Stanton

“Surely there is no greater monopoly than that of all men in denying to all women a voice in the laws they are compelled to obey.”

“We hold these truths to be self-evident: that all men and women are created equal.”

Above: Elizabeth Cady Stanton, age 32, flanked by her two sons. Photo circa 1848, when Stanton drafted “The Declaration of Sentiments,” including the demand for votes for women, for the first women’s rights convention in Seneca Falls, NY. 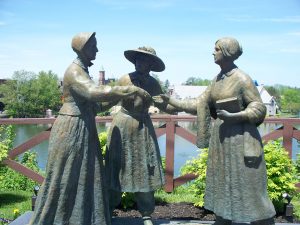 Elizabeth Cady Stanton was one of the key figures of the women’s rights movement.  Even though she is best known for her commitment to woman suffrage, Stanton was also concerned about women’s rights in general – including women’s property, employment, parental, and custody rights, and birth control.  Stanton and her family lived for 15 years in Seneca Falls, now the home of the Women’s Rights National Historical Park.

In 1851, Amelia Bloomer introduced Stanton to Susan B. Anthony.  This now-famous meeting of the two early leaders of the woman suffrage movement is captured in a sculpture in Seneca Falls.

In 1862, Stanton moved to New York City, where she continued to fight for woman suffrage and women’s rights until her death in 1902.