You are here: Home / Archives for Uncategorized

The Swan Boats in the Boston Public Garden have been the setting for The Women’s Suffrage Celebration Coalition program for Women’s Equality Day, August 26 for the past several years. The giant swans wear replica “Votes for Women” sashes, as do many of the speakers and attendees. 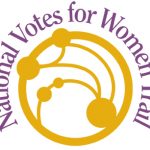 The National Votes for Women Trail (NVWT) is collecting sites from all over the U.S. to document the campaign for women’s suffrage that took place over more than seven decades. The NVWT is identifying the many sites that were integral to the suffrage movement, and making them accessible on a mobile-friendly website that can be easily searched by […]

In honor of Women’s Equality Day, the Zakim Bridge will shine purple, white and gold the night of August 26, 2017. Thank you to the Massachusetts Department of Transportation!

Dear Friend, One hundred years ago, Jeannette Rankin helped pave the way for all of us. In 1916, Rankin made history as the first woman elected to the U.S. Congress.  In 1917, Rankin proposed the formation of a Congressional Committee on Women’s Suffrage, which ultimately called for a constitutional amendment on a woman’s right to […]

WordPress is an award-winning web software, used by millions of webmasters worldwide for building their website or blog. SiteGround is proud to host this particular WordPress installation and provide users with multiple resources to facilitate the management of their WP websites: Expert WordPress Hosting SiteGround provides superior WordPress hosting focused on speed, security and customer […]