You are here: Home / Archives for Admin 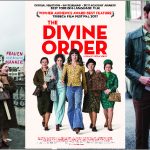 The WSCC hosted the opening night screening of “The Divine Order” December 1, 2017. Director Petra Volpe answered questions after the viewing, treating viewers to her unique director’s perspective and insights. 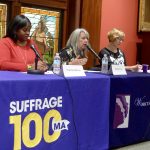 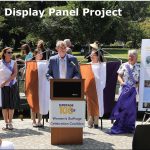 The year 2020 will mark the one hundredth anniversary of the ratification of the 19th Amendment to the U.S. Constitution — enabling women to vote. The Women’s Suffrage Celebration Coalition of Massachusetts is partnering with the Commonwealth Museum to present “Suffragist of the Month” display panels from August 2017 through August 2020, the centennial of […] 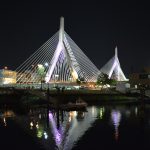 The Women’s Equality Day celebration at the Swan Boats on August 24, 2017 featured the unveiling of the Women’s Suffrage Panels that are on display at the Commonwealth Museum. Secretary of State William Galvin was the keynote speaker. In honor of Women’s Equality Day, the Zakim Bridge was awash in purple, white and gold, and the “BOSTON” lights of City Hall were purple the night of August 26, 2017.

In honor of Women’s Equality Day, the Zakim Bridge will shine purple, white and gold the night of August 26, 2017. Thank you to the Massachusetts Department of Transportation!

Dear Friend, One hundred years ago, Jeannette Rankin helped pave the way for all of us. In 1916, Rankin made history as the first woman elected to the U.S. Congress.  In 1917, Rankin proposed the formation of a Congressional Committee on Women’s Suffrage, which ultimately called for a constitutional amendment on a woman’s right to […]