You are here: Home / Resources / Did You Know? / Featured Suffragists / Alice Paul 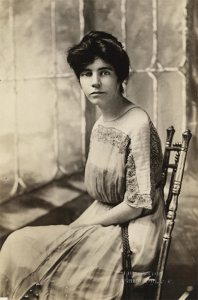 “I never doubted that equal rights was the right direction. Most reforms, most problems are complicated. But to me there is nothing complicated about ordinary equality.”

Born on January 11, 1885 in Moorestown, New Jersey, Alice Paul was a committed and passionate leader in the Women’s Suffrage Movement and the broader fight for gender equality. Growing up in a Quaker household and attending Quaker schools, Paul was immediately exposed to gender equality as a basic, yet significant, principle. She excelled academically at a young age, graduating at the top of her class in 1901 before receiving a biology degree in 1905 from Swarthmore College. As the purpose of her life and work became clearer, Paul approached her education with a fervent curiosity about how best to enact social solutions.

After receiving her masters in sociology from the University of Pennsylvania in 1907, Paul traveled to England to study social work. She met Emmeline Pankhurst’s daughter, Christabel Pankhurst, when Christabel was speaking publicly on behalf of the British Women’s Suffrage movement. Pankhurst joined British suffragettes and participated in demonstrations, marches, and sometimes destructive violent protests that on a few occasions sent her to jail.

In 1910, Paul returned to the United States inspired by her British counterparts and their commitment to direct action suggested by their motto, “Deeds not Words.” With this mindset, Paul lead the organization of the Women’s Suffrage Parade of 1913 in Washington, DC and formed the Congressional Union for Woman Suffrage with the specific purpose of lobbying Congress for a federal suffrage amendment.

Shortly after, in 1916, the Congressional Union for Woman Suffrage merged with the Woman’s Party to create the National Woman’s Party (NWP). Under Alice Paul’s leadership, the NWP began to focus on a constitutional amendment and adopted many direct action strategies Paul had learned in England. The suffragists’ active resistance and the public’s reaction to the women’s protests and occasional arrests was enough to convince President Wilson to announce his support for the suffrage amendment. This political success ultimately led to the passage of the 19th Amendment, guaranteeing women the right to vote.

After the 19th Amendment

With the passage of the 19th Amendment, many suffragists felt their efforts were no longer needed, that they had reached their goal. Paul was therefore in the minority in seeing women’s suffrage as merely one step in the journey towards gender equality. She once said:

“I always feel the movement is sort of a mosaic. Each of us puts in one little stone, and then you get a great mosaic at the end.”  (alicepaul.org)

Looking to continue the fight for women’s equality, Paul went on to write the Equal Rights Amendment (ERA) in 1923. In 1938, she expanded her efforts internationally, founding the World’s Women’s Party. She also helped draft the United Nations Charter and the Title VII Sexual Discrimination Clause to the 1964 Civil Rights Act in order to guarantee gender sensitivity and equality in the documents.

In 1977, Paul died in her hometown of Moorestown, New Jersey and her life’s work was commemorated at the Alice Paul Memorial March for Women’s Rights. Less than ten years later, in 1985, the Alice Paul Institute was founded, recognizing Paul as an exemplary example of a female agent of change. More recently, in April of 2016, President Barack Obama recognized and honored Paul’s work by naming the previous headquarters of the NWP as the Belmont-Paul Women’s Equality National Monument.